We made it! 2021 will surely be a wonderful year. What do you have planned? 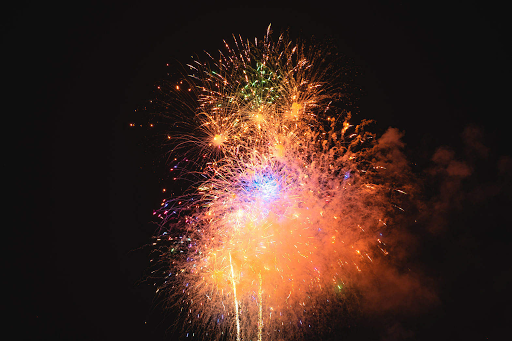 I'd like to say I have some new and great plans, but I will be writing, as usual. I have four books I'm trying to release this year - all historical romances. I think I've posted about this earlier, but here's the plan.

In February, An Inadvisable Wager will be released. I'm just finishing edits on this one. I really like this story. A laid-back hero who is enchanted by the drama and emotion of the heroine.

After that, it will be another story in the Infamous Forresters and two more books in the Wicked Affairs series.

Hopefully I'll hear from you throughout the year. Leave me some reviews, or contact me on FB or Twitter. All the best. E.

Posted by Eliza Lloyd at 2:47 PM No comments:

Wishing you and your family a very blessed and merry Christmas.
It it during such times we recognize the power of simple things: love, family, friends and freedom. Keep the faith. All will be well. 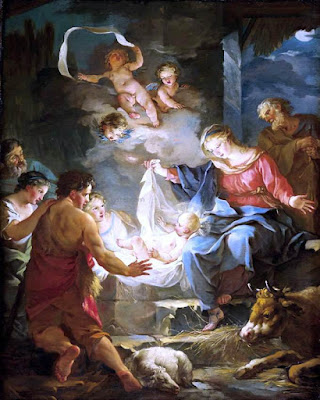 Posted by Eliza Lloyd at 8:33 PM No comments:

I just typed THE END last night on my newest Regency romance. This is the third book in The Curse of the Weatherby Ball series. Off to my editor!

I made a mistake in this series. I had the cover finished for this book very early on, but then I ended up finishing Book Three (Not Your Average Earl) before Book Two. Ooopsy!

So here's the blurb:

Nora Blasington’s curse is that she was born to the notorious George Blasington, renowned thief and traitor. Avenging her father is her lot in life and she is determined to prove that three ton gentlemen illegitimately benefited, stealing her father’s properties. Properties that rightfully belonged to her brother, the 4th earl of Wargrove.

Only they are dead and can no longer reveal their secrets. No bother! She will wreak vengeance on the sons of the Wicked Three since they have what she wants: Henbury Hall, the Cornish tin mines and the Henbury stallions.

At the Weatherby Ball she catches the eye of the Earl of Carlow, the current owner of Henbury Hall. He willingly falls into her trap. Nora thinks the ball curse has worked in her favor.

What she doesn’t know is that Graham Sutter is quite taken with the mysterious and oddly dramatic beauty. 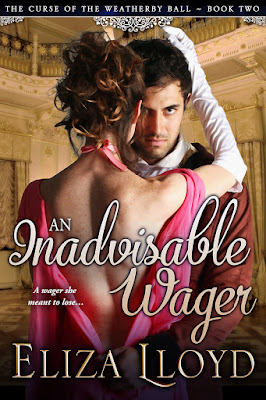 I love this cover. Another great one by Dar Albert.

Posted by Eliza Lloyd at 4:37 PM No comments:

The other day I was bemoaning the fact my very first book had been selling a little better than usual, and thinking, oh, no, not my FIRST book! I've written so many better books! So, in order to help you decide which book to read, I'm offering Wicked Siren, Book Six in the Wicked Affairs series, for FREE. This series of books are standalone but with reoccurring characters, so you'll get to know all of them as they pop in and out of ballrooms and parks.

Not only is this one of my favorite books in this series, it is a reader favorite too! Viviana Love is full of passion and vitality, attracting men of all stripes, but it is staid Baron Alex Preston who becomes her anchor. See the BLURB below.

Let me know what you think - AND IF YOU READ, please leave a review. I need them. :)

I don't know if it is free at all retail sites yet but it will be soon. 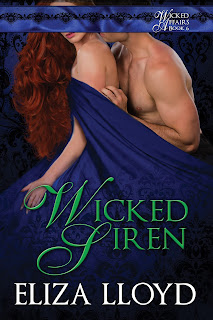 An unconventional woman. An inconvenient marriage. An unconditional love.

Famed diva Viviana Love will do what it takes to survive in London. Seduce titled men. Give up her child in order that he might have a better life. Hide her past so that she might have a future.

And when she makes the mistake of a lifetime a second time, she does the unthinkable and agrees to marry Baron Alexander Preston—the staid and proper country gentleman who believes life in the country is all a man needs.

Alex is confounded by the wild creature he is to escort to London. Miss Love is an indiscreet harridan who believes she can seduce him. And she succeeds royally. When she presents him with the opportunity for his heir, he does what no sane man would. He marries Viviana and finds his life turned upside down.

Alex has never felt more alive. Their nights are filled with passion, their days with conflict. When Viviana realizes she might lose her proper gentleman, the truth is the only thing that can save her.

Posted by Eliza Lloyd at 8:38 AM No comments:

Wicked Siren is Number 1 today on Kobo in the Historical Erotica Category. Viviana Love is a passionate creature and so much fun - probably one of the best heroines I've written. Check it out at all major outlets. 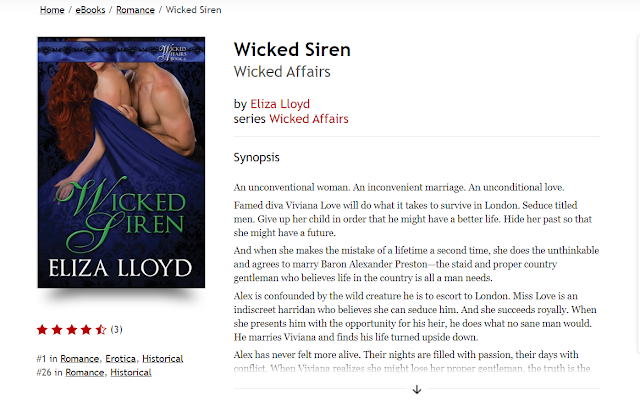 Snippet from An Inadvisable Wager

I just posted this on my author page on Facebook and decided I should share it here too! I am loving everything about this work and can't wait to share it. Right now this will be released early 2021.

Here's a snippet from An Inadvisable Wager:

"Three more people pushed into the library while Lady Weatherby was huffing about the absolute scandal of it! Nora let her tears flow, one of those gifts given to women to use against men. Carlow had removed his person from hers, allowing her to sit up, bat her lashes and then press her hand to her brow.

Then Timothy strolled in.

Nora was just about out of tears—and ready for her brother to scream holy hell about Carlow ruining—ruining—his sister.

“And who are you?” Carlow demanded.

“I am Nora’s brother, Timothy Blasington. Earl of Henbury. And I don’t need an introduction to a scoundrel like you, Carlow. Isn’t it just like your family to take advantage of the defenseless,” he said, speaking with authority and anger. “Nora, come stand beside me and away from him.”

“You’re Henbury? And you’re Nora Blasington?” Carlow asked, his brows reaching the ceiling while his gaze shot daggers at her.

“This is unspeakable,” Reverend Wright, sputtered. “I will see the Archbishop of Canterbury this evening and demand a special license and you, sir, will attend with me.”

“It’s already morning,” Carlow said sarcastically. Nora glanced at the mantel clock to see it was just a little after two.

“He’s not going anywhere,” Timothy demanded. “There are agreements to be reached and until I hear it from his own lips, he’s not leaving this room.”

“And what is it you want me to say?” Carlow asked, feigning innocence.

“By God, you will apologize first. Second, you will get on your knees and beg for my sister’s hand.”

“Or what? Carlow asked.

Posted by Eliza Lloyd at 1:26 PM No comments:

Email ThisBlogThis!Share to TwitterShare to FacebookShare to Pinterest
Labels: An Inadvisable Wager, Eliza Lloyd, Romance, The Curse of the Weatherby Ball

What am I working on now?

The last few months have been a challenge for us all, but I'm happy to say that my two contemporaries are done! I've just finished final edits for Pinnacle, which releases on September 15th. Just a reminder to pre-order because it is on sale until release day!

For the next twelve months, I have an ambitious goal. I'm working on four Regency novels. Gulp! Can I do it? I'm pretty sure because the stories are all about half finished.

So what are they?

I'm going to do two more in the Wicked Affairs series currently titled Wicked Ember and Wicked Shades. The protags have been mentioned in other books but I will surprise you with a later post (I've mentioned them before so if you're REALLY curious, you could probably find out.)

The other two are books in existing series. One in the Infamous Forresters and the other in The Curse of the Weatherby Ball. So this is a little surprise for you. I've had theses covers done for a while. Now, I have to say that for me, writing a certain novel is about working on the one that "takes" you in the moment. So, even though the covers are done for these novels, other books took me first.

Aren't these just beautiful covers? Dar Albert delivers again! I am especially in love with An Inadvisable Wager cover. I think it is my second favorite cover ever!!!! I'm right in the middle of writing a fantastic card game scene for this novel. Of course, they are at the Weatherby Ball so who knows what might happen.

As for A Wife Is Forever, I'm not sure that will be the final title, but I'll keep you posted.

So what do you think of my Regency surprises for the day? 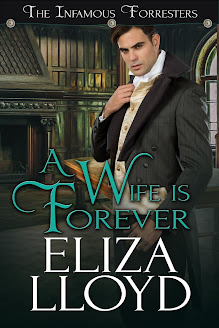 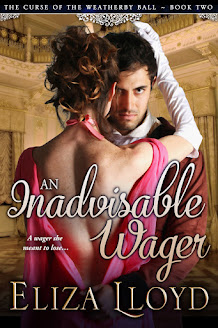 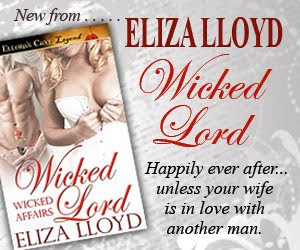 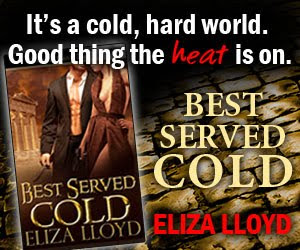 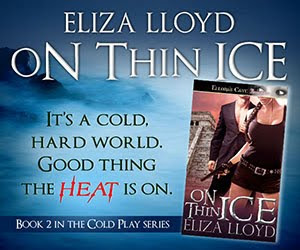